Diablo 3 is the third release in the Diablo action role-playing game series published by Blizzard Entertainment. Diablo 3 features new classes, four acts and a Real Money Auction House. Diablo 3 is currently in closed beta and expected to be released in Q2 2012.

Diablo 3 takes place on Sanctuary; a World lost to Darkness. The prelude of Diablo 3 tells of an unknown object falling from the skies and striking the Tristram Cathedral. According the official Diablo 3 web site, a “Harbinger of Doom” awakens an ancient evil, forcing the heroes of Sanctuary to defend their home once again.

Diablo 3 was officially announced on June 28, 2008 at the Blizzard World Wide Invitational in Paris. Diablo 3 is currently in closed beta which launched on September 20 2011. While participation in the D3 Beta officially is not exclusive to North America, Diablo 3 Beta invitations to Asia and EU have been severely limited. The status of distribution of D3 Beta invites to Africa, Oceania and South America is currently unknown.

Blizzard has not released an official release date for Diablo 3. Previously Blizzard has hinted at a Q4 2011 and Q1 2012 release for D3. At the latest Activision Blizzard Investor Call, Diablo 3 was mentioned as slated for a Q2 release. Check the Diablo 3 Release Date Tracker at DiabloBuildsGuide for further information.

There are classes but no playable waring factions in Diablo 3. While Diablo 3 offers extensive team play and PVP features and an Auction House reminiscent of the Auction Houses in World of Warcraft and other MMO’s, Diablo 3 is not a MMO. Diablo 3 classes include the Barbarian and Monk melee classes, the Demon Hunter melee caster hybrid class and the Witch Doctor and Wizard caster classes. 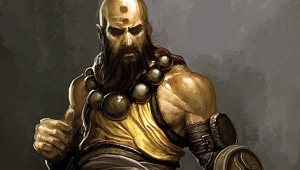 The Monk is one of two Diablo 3 melee classes. Unlike the Barbarian, the Monk has previously not been featured in a previous Diablo game. The Monk can equip weapons, but relies mainly on his fists to deal damage.

Besides dealing devastating damage, the abilities and skills of the Monk focus on Spirit. Spirit is the resource that is either generated or spent as the Monk executes most of his skills. Monk builds include skills and abilities for damage dealing, survivability and utility. For further info Monk talent builds, check Monk Builds & Specs. For a breakdown of Monk skills, please see the Monk Skills and Abilities.

As a majority of Blizzard games, Diablo 3 is very much a game of gear. Gear of various armor values and stats can be equipped by one or several classes. Each class has one specific core stat attribute. Most stats and attributes are beneficial in some way or another to most classes. For a complete break down on stats, check Monk Stats and Attributes.